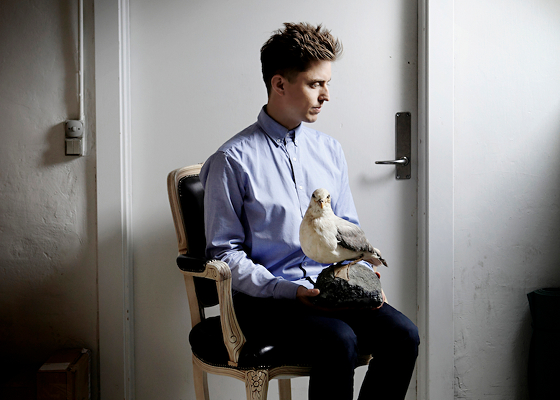 The 17th installment of the Alpha-ville podcast series presents Danish electronic musician Jens B. Christiansen (a.k.a Rumpistol). [Note: We met Jens on our trip back from Mutek (Montreal) where he played a very nice live set with Red Baron and we invited him to create a mix for Alpha-ville, thanks Jens!]

Rumpistol may not be a name that you’re familiar with, but you really ought to be. He is Danish electronic musician Jens B. Christiansen, and makes fractured soul music that pivots upon shifting slats of abstract beats that has echoes of Brainfeeder’s beat music or James Blake if he fetishised Warp’s 90s output instead of contemporary bass music.

He’s also highly prolific, releasing three albums and two EPs since 2003 and heading his own label Rump Recordings. His latest album, Floating was a collaboration with LA-based vocalist Red Baron and saw him straddling the forefront of technology by working with Hamburg studio Futura Epsis 1 to create a groundbreaking mobile app which aimed to bring the experience of a Rumpistol live show into your bedroom/train carriage/utility room.

Jens has taken some time out from his hectic schedule to put together this instalment of the Alpha-ville podcast – listen closely, it’s a cracker. We caught up with him to get the lowdown about the Floating app, provide some context and discuss why distinctions between mainstream and avant garde are increasingly pointless.

Oh, and the name means space gun, by the way …

Tell us a bit about the podcast you’ve put together for Alpha–ville, did you have an idea of what you wanted to achieve with it before setting out?

I wanted to see what happened if I mixed some of my own tracks with older tracks that have worked as inspiration for me through the years, as well as blending in newer personal favourites, not particularly from the same genre. I chose to feature some of the younger Danish producers that I think deserve some more attention, like Sekuoia, Jonas K.P, Beastie Respond and Odd Harmonics, as well as a new track from one of the grand old men of Danish electronica: Thomas Knak aka Opiate.

I’ve used quite a bit of studio trickery on the way, so there’s no doubt it would be impossible for me to recreate this mix by using regular turntables.

With the release of your album Floating, you worked with Hamburg-based studio Futura Epsis 1 to create a defined visual element to run alongside your music – the mobile/table app called ‘Floating’. What was the reason behind introducing this multimedia dimension?

On one hand you can see the Floating app as digital merchandising, but the main intention was actually to inspire people to get creative and make their own visuals, using FE1′s 3D platform.

The app enables people to experience the visuals of our show, but instead of just re-enacting the show, they can create their own version, or something completely different. WIRED just wrote a really nice feature on the app, and it also just received the Mobile Of The Day Award from FWA so the response has been great so far. 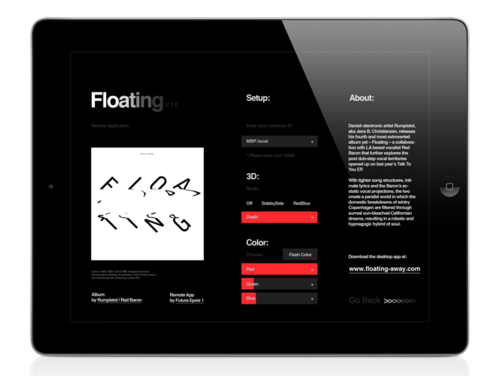 Why are visuals so integral to the world you create? Why did you want to take them out of the live venue and into people’s homes?

When I’m on stage I’m usually pretty busy controlling different parameters of the sound, which is typically not very interesting to look at for one hour, so using visuals is just another way of channeling the emotion and pulse of the music.

Giving people access to the visuals from their homes, means that basically everyone with an internet connection can get to experience that side of our show no matter where in the world they are, so since we’re not touring a lot, we’re reaching way more people in this way. Plus we’re giving people a tool they can get creative with.

It seems like it’s increasingly important that listeners are able to engage with music on more than one level – like the sudden proliferation of interactive music videos and the like – whether it be Bjork’s last album, Beck’s computer game project or Bobby Womack’s mobile music video. As someone interested in listener interaction, do you feel this could be the future?

Definitely. The new generations are born with the internet in their pocket, which is so dramatically different compared to when I grew up. I’m choosing to view this as a positive thing, because this new generation is using the technology in a totally intuitive way – where most people, in my generation anyway – sees it as an annoying but necessary tool.

I noticed you’ve manipulated some of the signifiers of R’n’B in the podcast – there’s Red Baron’s soulful vocals of course, but also in the texture and tone – there’s a sense of longing. Is this a genre of music you feel readily gives itself to up to retooling and experimentalism?

I’ve always felt that my music had a sense of longing, so when I decided to express that through vocals, it felt natural to choose the voice of Red Baron, which I personally think has more of a Horace Andy-like timbre than any r’n’b singers I’m aware of, but I guess soul and reggae music does have a lot in common.

When I sample vocals I don’t really care what genre it comes from, because it’s going to get altered drastically anyways. I recently found some nice material in a country song, but after it’s been chopped up and pitched, you really can’t tell what genre it belongs to. I think it has become a bit of a fashion lately for indie bands and electronic producers to namedrop r’n’b artists as inspiration, but for a lot of people r’n’b is still equal to mainstream, which is often considered a negative thing.

I choose to look at it from a strictly sonic perspective, instead of focusing on the negative connotations the genre brings. Truth be told I often find that, production-wise, there is often just as much creativity going on in popular or so-called mainstream music as in the more experimental music genres. It just depends on how you look at it.

While incredibly textured and somewhat abstract, your own productions – particularly on Floating –  also seem quite pop literate. In the sense that the melodies and the textures are incredibly bold. Do you see a distinction between pop and what some may call, avant garde, experimental music? It’s interesting that you ended on the Drake instrumental, the sound palette is so…strange, but you can’t get more mainstream than Drake.

Again, I think this distinction between pop and so-called avant garde is irrelevant. For me Drake is a good example of that. ‘Marvin’s Room’ for instance has way more sub in the mix than most FM friendly music and the arrangement is so minimalistic and the production kind of muffled, so it is really only the sound of his vocals and how loud it sits in the mix, that makes it seem like a mainstream track.

After many listens I still really like the vibe of the track, and when I discovered that it merged really well with Jonas K.P.’s ‘Day’ it got to be the closing track.

You’re originally from Denmark, what’s the electronic music scene like there? And how has coming from Denmark informed your music?

Actually I don’t really know what’s going on, because I don’t go out so much anymore. When I started playing live 10 years ago, the whole scene was more underground, there were less acts, less clubs and the audiences were smaller and I guess a bit more geeky than today. Since then electronic music has just grown, new electronic clubs and festivals have emerged, and a lot of kids have started producing, which is all very positive I think.

It’s kind of funny that my new home Project: Mooncircle, which is a great Berlin-based label by the way, has signed two Danish artists this year (me and Sekuoia), and at the moment I feel much closer connected to their artists now than to the Danish scene. That said, Denmark does have a lot of electronic music to offer, considering the small population, and you can find acts from almost every electronic genre there is.

I released quite a few of the more experimental acts like Bjørn Svin and System on my own label Rump Recordings (www.rump.nu).

On your recently released album Floating you collaborated with LA-based vocalist Red Baron, how did that relationship come to be? What’s the working process between you, how do you exchange ideas?

We met back in 2008 through a fellow friend, but didn’t start working together until last year, where I asked him to come by the studio and record some vocals. I’d been wanting to work with a singer for a long time but only had a vague idea about where it was going to take me. I didn’t expect it to end up in a collaboration album at all! I knew I really liked his voice, and we already got along very well before I asked him, and luckily it turned out that he was both really easy and inspiring to work with.

Because he lives in Los Angeles, our sessions are always pretty limited, forcing us to work harder and more focused than normally. I usually send him a demo and we discuss the possibilities over Skype. Eventually he comes to Denmark and sings and leaves me fiddling around with the recordings.

How did you get into making music, particularly electronic music?

I grew up in a very musical environment and picked up the guitar at the age of 6, so as long as I remember I just wanted to make music. When I went traveling in Australia in ’97/98, two English dudes called Tim and Andy introduced me to some electronic music which really blew me away.

We drove 2000 km together through the desert listening to tapes with acts I’d never paid attention to before: Aphex Twin, Autechre, DJ Shadow, Plastikman and many others. We stayed in contact for a couple of years and exchanged mix-tapes, but unfortunately I’ve lost all contact with them.

Who are there any artists creating music now that you feel currently pushing the boundaries? Is anyone really inspiring you at the moment?

Project: Mooncircle never disappoints me in their releases and Gordon who is running the label is really great at spotting new talent. I’m looking forward to The Gaslamp Killer’s debut album. He’s my favorite DJ at the moment. Red Baron and I went and saw him at the Low End Theory night in LA, in April, which was really rocking while and still totally eclectic. I also like the two tracks from Jai Paul so I’m quite curious to hear his upcoming album.

Ha ha! The English speaking people must think it’s such a weird name … It means space gun in Danish and I spontaneously wrote it on a minidisc that contained an ambient DJ set I recorded before going on a trip to India with a friend around the turn of the millennium. The disc became our favourite of the trip, causing us to say ‘let’s hear Rumpistol’ etc, so the name stuck and it still reminds me of an adventurous period of my life.

With your new album in the bag, what’s next for you?

I’m working on a new EP for Project: Mooncircle, plus I have a couple of shows coming up.

Some will be solo and some will be with the Baron and our German VJ: Andreas Rothaug, who is also the head chief of Futura Epsis 1.

Listen to the podcast here: