Playing With Fire by Alexandra Levasseur 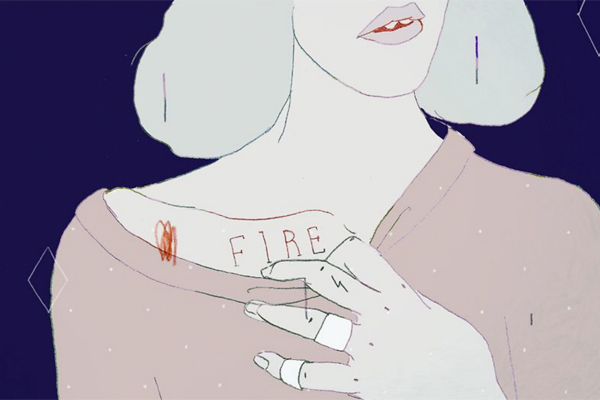 This week’s pick is Playing With Fire, an animation by illustrator Alexanda Levasseur.

Levasseur Lives and works in Montreal, Qc, Canada. She studied Fine Arts and Graphic Design at University of Costa Rica, a Postgraduate in Creative Illustration and Visual Communication at EINA School of Art and Design, Barcelona, Spain and is Currently studying Major in Film Animation at Concordia University, Montreal.

The film is an experimental animation and extension of the illustrator’s 2D work in acrylic and pencil.

“I have been experimenting with animation a bit before, but it is my most serious film so far.” Levasseur explains.”I just entered the Mel Hoppenheim School of Cinema of Montreal in September 2012.  It is the first-year-film of the 3 years program.” 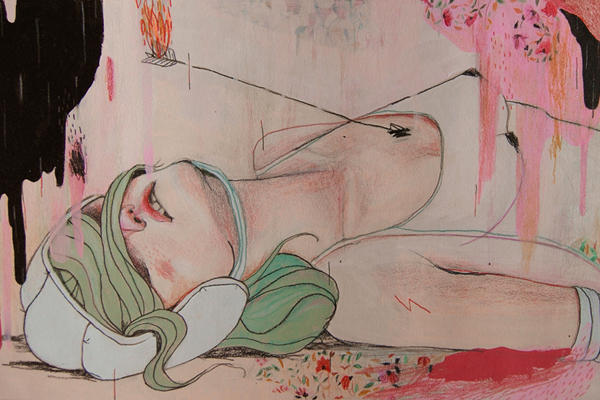 “I started from a concept I was working on – paintings-  during the last year. I made a few sketches and pictured how to make it move, then animate the clips with pencil on paper. I scanned everything, and adjust the timing in TVPaint. When I had all my clips done, I edited in Adobe Premiere, and After Effects and coloured each individual frames in Photoshop.”

“The character is putting herself into a dangerous situation being aware she will get hurt, but she feels like doing it anyway. Her protective gear is useless, she is shooting herself in the foot.”

Levasseur writes that her drawings and paintings “explore the spontaneity and inspiration that every morning gives me, either by environmental or emotional circumstances – states of mind, energy, desires, etc.

When the fall comes, the body is looking for physical comfort. The feminines figures represented find themselves surrounded with wool clothes, blankets and pillows. “Duvets” and walls are covered with colorfull flower patterns, simulating spring and summer life and the warmth of the nest where to hide until the sun comes again. In the winter days, the bathtub hot water remains the best way to console the skin and bones from this unkind climate.” 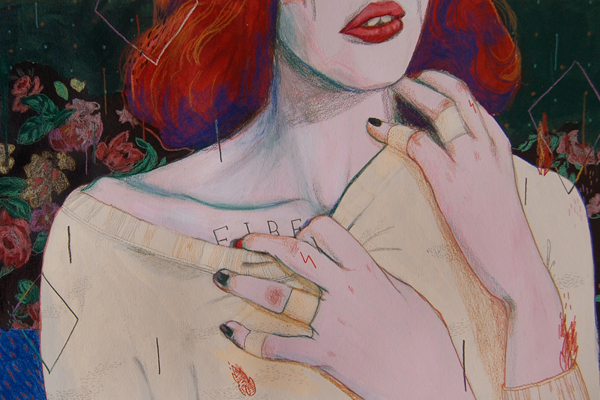 The soundtrack to the film is  ”T Strings” by The Mole from Fur Trade Recordings, a Montreal-based label dedicated to underground electronic music. The film also made Vimeo’s Staff Picks list, a channel of the Vimeo staff’s favourite films.

“Playing with Fire is also the title of my next solo show,” She concludes. “That will take place at Galerie Roccia in Montreal in June. Most of the pieces are made from the frames of the film. The film itself will be screened at the gallery and there will be around 25 paintings/drawings exhibited.”