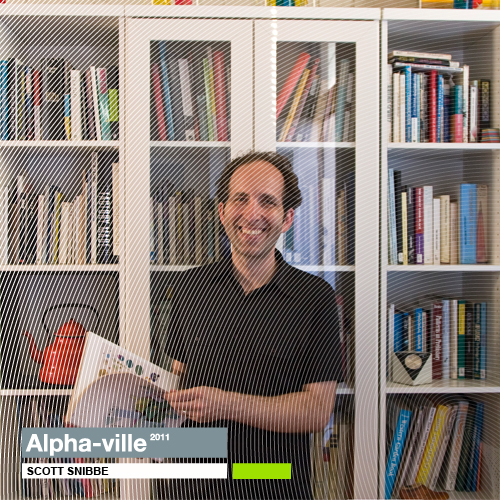 Scott Snibbe will join the Alpha-ville Symposium remotely to present Björk’s Biophilia – the first app album – and discuss how the emergence of music apps for mobile devices promises to reacquaint listeners with an immersive, intimate music experience that has been lost in the age of the digital download. He will particularly share Björk’s view, which he enthusiastically embraces, on how technology can bring people closer to nature and music.

Scott Snibbe is a media artist, filmmaker, and researcher in interactivity. Whether on mobile devices or in large public spaces, his interactive art spurs people to participate socially, emotionally, and physically. His works are strongly influenced by cinema: particularly animation, silent, and surrealist film; and often mix live and filmed performances with real-time interaction. Snibbe’s artwork is in the permanent collections of the Whitney Museum of American Art (New York) and The Museum of Modern Art (New York); and has been shown in several hundred solo and group exhibitions worldwide, including a solo retrospective at the Institute of Contemporary Arts in London. His large-scale interactive projects have been incorporated into concert tours, Olympics, science museums, airports, and other major public spaces and events, and he has collaborated on interactive projects with musicians and filmmakers including Björk and James Cameron.

Snibbe has received grants and awards for his artwork from the National Science Foundation, Renew Media, the Rockefeller Foundation, the Ford Foundation, Prix Ars Electronica, and the National Endowment for the Arts. He is the founder of three organizations: Snibbe Interactive, creating interactive exhibits and events; Scott Snibbe Studio, producing apps for mobile devices; and Sona Research, engaging in educational and cultural research.

Snibbe was born in 1969 in New York City. He holds Bachelor’s degrees in Computer Science and Fine Art, and a Master’s in Computer Science from Brown University. Snibbe studied experimental animation at the Rhode Island School of Design and his films have been widely shown internationally. He has taught media art and experimental film at Brown University, The San Francisco Art Institute, the California Institute of the Arts, the Rhode Island School of Design, and U.C. Berkeley. Early in his career, Snibbe worked at Adobe Systems where he helped to create the special effects software After Effects. Snibbe also worked at Interval Research, performing basic research in haptics, computer vision, and interactive cinema. As a researcher, Snibbe has published numerous articles and academic papers, and is an inventor on over a dozen patents.