Shantell Martin is a young British visual artist currently working in Tribeca and living in Brooklyn, NY. After graduating from Central St Martins in 2003 with a first in Graphic Design, Shantell has become globally renowned for her stream-of-consciousness line drawings and creative light projections. Acclaimed internationally for her inimitable and improvisational style, her work has had a transformational effect across the spectrum of art, fashion, design and music.

A staple fixture of the Brooklyn art scene, Shantell’s recent art commissions included an exterior installation of the Bata Shoe Museum in Toronto in 2013 and a custom installation for Miami Art Week’s Pulse in 2012. She regularly creates live digital drawings at conferences, musical performances, and museums including the Brooklyn Museum, and MoMA. 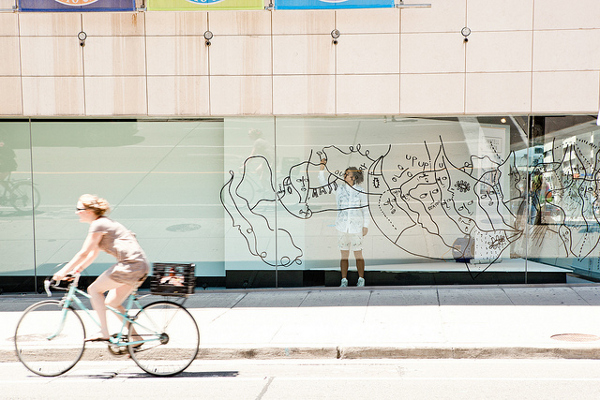 Shantell’s first stop after leaving London was Tokyo, where she began performing as a VJ. Her innovative projections were also featured on the iconic giant screens at Shibuya and Harajuku crossings. In 2005, during her formative spell in Asia, Shantell was asked by a friend to perform her drawing live at an event, using a camcorder and projector to record the art issuing from her pen. Since then, Shantell’s art has been characterised by a spontaneous and performative element that gives her work an exciting sense of unpredictability and malleability.

Unique and created in situ, Shantell’s work constitutes a translation of her personal inner vision into a shared visual narrative. Throughout her career, her choice of media has ranged from projectors and the coding platform openFrameworks, before coming full circle back to her trusty Staedtler marker. Since then, the inspirational and unconventional product of her pen has decorated the offices of the trend consultancy PSFK and created a limited edition shoe to celebrate the 40th anniversary of the Nike Cortez for Nike iD. 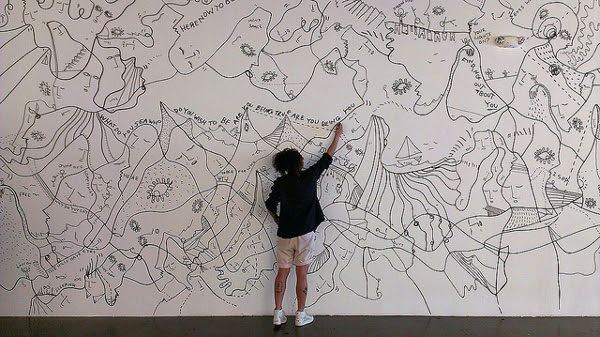 Last year, Shantell put on her first solo show, Continuous Line at Black and White Gallery in Williamsburg. The sell out exhibition, which ran from 21 Sept to 23 Dec, spanned both the indoor and outdoor space of the gallery, and saw the artist convert whitewashed walls and found objects into a mapped flow of sensations, memories autobiographical commentary and dreamlike art. 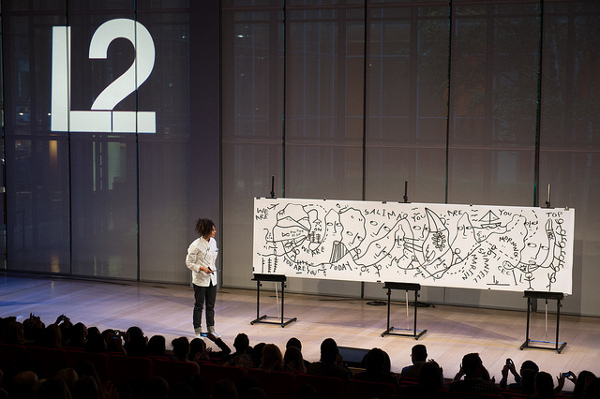 In October last year, Shantell took part in her first TED talk, before appearing at PopTech festival in Maine and L2 Forum in NY. Having recently turned her attention to volunteering her talents in teaching kids under aegis of Apple Arts and the Manhattan Apparel Project, as well as serving as an adjunct professor at NYU, Shantell and her impromptu art remain in high demand.

Shantell is not new to Alpha-ville, her works were featured as Pick of The Week #89 in 2012. And today we’re very excited to confirm her speaking appearance at the Alpha-ville Exchange Conference, followed by a special one off LIVE DRAWING SESSION for conference attendees where you will be able to see her talent in action.

Ensure you don’t miss her by getting your tickets now. Or explore more EXCHANGE artists here .