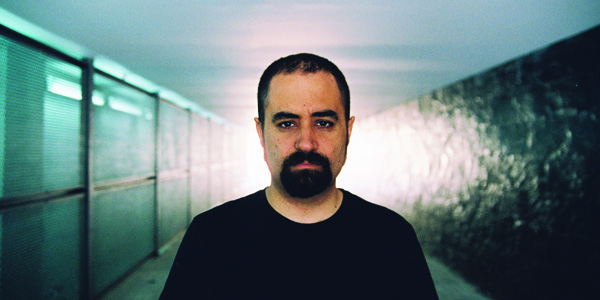 As Murcof, Fernando Corona has been crafting compositions on the margins of electronic music for over a decade. From this vantage point he has been able to cross into many disciplines and experiment with many forms – soundtrack, art installation, site-specific compositions as well as the traditional album format – without feeling tied to any. Perhaps high tendency to occupy this privileged space comes from living and working in Tijuana, Mexico, a city on the border of the US, but seemingly in thrall to neither country; a place he describes as having “certain cultural freedom there, or cultural void”. However you choose to frame it, his music is at once borne of classicism while simultaneously dismantling the rigidity that is inherent within it.

Murcof performed at the the Alpha-ville LIVE event at the Hackney Empire on 6 October, with his collaboration with Simon Geilfus of AntiVJ for a live AV show which has been in the works since 2009.

By way of a primer, we got in contact with Fernando to brief us on what to expect at the show and find out a little more about the elusive and endlessly fascinating producer. Oh, and when we can expect to see his long awaited Oceano album (hint: not for a while). And he’s made a compilation of music he likes.

Can you give us some insight into what you’ve got planned for the Alpha-ville show?

A floating widescreen projection between the audience and stage with images depicting a sort of cosmic trip from the macro to the micro, from the invisible to the visible. Music-wise the show is based mostly on my Cosmos album, but also includes new material and new arrangements specially adapted for this project. It’s now been around three years since we started this project and it has been evolving steadily since then, so we will be presenting the latest version.

You’re doing a collaboration with AntiVJ. I understand they’re a visual label, but can you give us some more background and how the collaboration came about?

It happened in steps, I first knew of AntiVJ through my agent, Mark Slater, back in early 2008 when we were looking for a visual artist who could join me on a new work which I was commissioned to do. For this occasion I worked with Rod Maclachlan (aka Flicker) on the visuals, it was great, but the antecedent was set with Antivj.

Later that year we tried a first live collaboration at the Venn Festival in Bristol where I was scheduled to perform with Joanie Lemercier (also of AntiVJ) but I was unable to travel, so he had to go on by himself with my music being played back from a recording. Later that same year I finally met with Nico (AntiVJ’s manager) while I was on tour passing through Bristol, where he was then based, and had a good chat about our possible collaboration. A few months afterwards, in early 2009, we did our first official live performance at the Futuresonic fest in Manchester, this time with Simon Geilfus. Before this I had only seen snippets of Simon’s work and was blown away by how well the music and visuals came together, and the unusual and very effective setup of AntiVJ, with their semitransparent widescreens hanging between us and the audience. I knew a very interesting and fruitful relation had started.

Are visuals a crucial part of what you do in a live setting? Do you feel it’s important to make a connection with the audience on an emotional level rather than just an intellectual level?

It’s not exactly crucial, it’s great to have visuals when it’s done properly but the music alone can be equally powerful as well, they are different experiences.

Yes to the second question, ideally on both emotional and intellectual levels simultaneously and that can be done with music alone or with visuals.

Going back a bit, how did you get into making electronic music? What stuff were you listening to that made you think you wanted to get involved?

Jean Michael Jarre was a huge influence for me back in the late 70s early 80s, his Oxygene and Equinox albums especially. Also a record by Jon Santo playing Bach (aka Wendy Carlos) that my father had. I used to lock myself in the car where we had a cassette player and listen to these albums a few times in one go.

These records are the ones who got me interested in electronic music, I was very curious to find out how they did all those strange sounds, I had no idea back then how a synthesiser worked, I could only imagine from the pictures on these albums with their big modular systems covering entire walls.

A few years later around the mid 80s I got my first little Casio sampler, a cheap 5 second volatile sampling memory with mini keys that kept me busy for a little while until I could afford my first “pro” keyboard, a Kawai K1 – that was a giant leap for me. After that I joined forces with other similar minded friends who had other equipment, like samplers, sequencers, reverb units etc and our first project was born, it was called Vortex. That was in the late 80′s and we were doing acid house, techno and industrial stuff. It was lots of fun.

Did you grow up in a musical family? What music were you exposed to growing up?

Yes, there are a lot of artists and musicians in my family, especially from my father’s side. I grew up between jam sessions and gigs, my father was mainly a blues and rock musician but used to have a decent record collection ranging from classical stuff (mainly Bach, which he loved) to ABBA, a lot of The Beatles, Carpenters and CCR as well. He was a multi instrumentalist so there where always different instruments laying around the house; accordions, guitars, an organ …  As a child I used to play with them once in a while but I didn’t get really interested in music until I was in my teens.
How did growing up in Mexico shape you as an artist?

Difficult to pinpoint, but Mexico is a big, complex and diverse country with many layers. Many different world views coexist there. Tijuana in particular is a weird phenomena, it’s not really Mexico nor USA so I didn’t really feel compromised to please either one when creating music. There’s a certain cultural freedom there, or cultural void, I don’t know, but being so far from the rest of Mexico and with little or no spaces to present what I was doing I could concentrate more on experimenting without caring for the reaction of the audience because there was hardly any, and being close to the US gave me access to technology and information. I’m talking pre-internet era where you had to actually buy information! [laughs]

Many people do pass through there from all of Mexico and Central/South America, some to work in Tijuana and others with the intention to cross to the states to chase the American Dream. Some make it and some get sent back by the border patrol and end up staying in Tijuana, until they try again that is, so there is this feeling of constant movement, of people, of ideas. In fact the Tijuana/San Diego border is the busiest in the world, so all kinds of people pass through Tijuana. It’ chaotic, intense and unpredictable, and this applies also to the artistic/creative world.

You live in Barcelona, what’s the scene like there? how does it compare to the scene in Tijuana, where you were living before?

I do live in Barcelona but I am not that aware of the local scene here, I live a quiet family life here when I’m home and not traveling around. However, there’s definitely more things happening here, there’s way more opportunities and things are a bit more organised with dedicated spaces, specialized media, festivals, etc. In Tijuana if you don’t do things yourself no one else will help, except for your friends and collaborators. There, in general terms, it’s a DIY scene all the way from the creation of a work to the space where you present it. In Mexico art tends to be more about survival than anything else, particularly outside of the big cities.

Your work has crossed into many worlds, obviously soundtracks like La Sangre Iluminada and site specific compositions like the Versailles Sessions, to collaborations with with BCN216 and Flicker. As a composer is it important to maintain this dialogue between disciplines?

Yes, I try to not pay too much attention to the labelling of different music genres and artistic disciplines; it’s all human imagination/creativity being expressed through different avenues, depending on our own individual preferences and backgrounds. It is very important to focus on the actual content rather than the way it’s presented – this is what I’ve learned by collaborating with different artists from different disciplines and musical genres.

What projects have you got lined up? Will you be releasing an album next year?

With AntiVJ to start with, Simon and I have a few residencies (three actually) lined up before the year ends in France where we will be developing the next step in our collaboration, meaning creating new material from scratch together. We will hopefully be presenting that next year although we are unsure what form this will take at this point, but we want to go beyond the stage, onto installations and other areas.

I’ve been working on Oceano on and off as well for the past few years but I haven’t been able to finish it, I guess I haven’t had much to say by myself, so no release date still I’m afraid, all I can say is that it wont be out until it’s good and ready. I am building a new modular synth so maybe that will bring some fresh ideas and inspiration to help me finish the album.