This week’s pick is Memento Mori by Martin Bircher, a sculptural installation about technology and the passage of time. 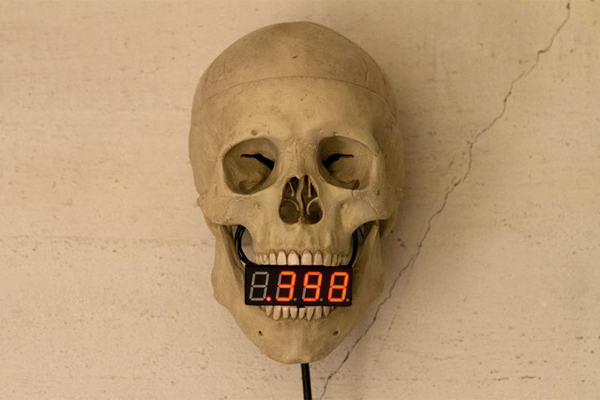 Bircher is an artist and lecturer from Switzerland. He received a degree in Fine Arts with specialization in Media Art in 2003 from the University of Applied Sciences Northwest Switzerland. In 2006 he migrated to Kouvola, Finland, where he works as a media artist and lecturer for Digital Media. He occasionally teaches workshops in the fields of physical computing and electronic media in art.  Since last Summer Bircher is working only as a part time lecturer and as full time artist after he received a one year grant from the Finnish Cultural Foundation.

Bircher’s interest in his artistic work lies in “combining antiquated items and digital technology in order to create objects with new purposes – to “objets trouvés numériques”.”(Mar.li) 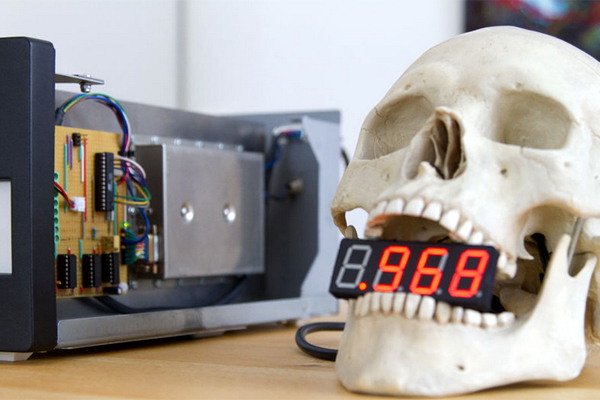 Bircher spoke to Alpha-ville about his installation ‘Memento Mori’.

“Collecting oddities and working with technology are two of the things I am passionate about. I find objects at flea markets or at auctions, which just speak to me. I usually don’t know immediately what their destiny will be, but there is a fascination about them.
The casted skull, which was obviously used as a study object (it has small numbers drawn on it to mark the different bones),  I found online. It has been staying in the bookshelf for a few month. It often takes time to understand (or deepen the relationship to) an object.” 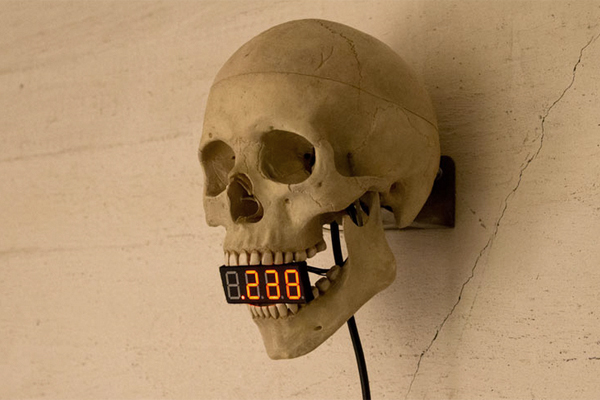 “During these months I read that used rubidium standards are available online and come at an affordable price. Out of curiosity I ordered one, hooked it up to a power supply and watched it’s super-accurate time signal, in the form of a sine wave, on the screen of the oscilloscope. It got me thinking. We are able to measure something so subjective like time, with an incredible accuracy. Time, which is basically all we have got. Time stands between us and our end and we are clueless how much we have left – until that moment we take our last breath.”

Memento Mori – Latin for ‘remember that you will die’ – has historically been a feature of art, often seen as a lurking skull in the background of a painting or portrait. It serves as a reminder for the ephemeral nature of existence and is generally used as a comment on the futility of materialism. 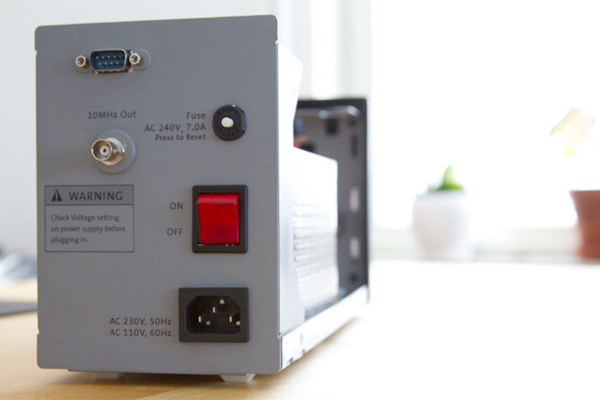 “We are depending on atomic clocks for communication and navigation in our everyday lives as we are depending on a vast amount of other technologies. We humans strive for the ability to make the invisible visible, and measure things with outstanding precision in order to gain more knowledge – maybe just to compensate for the one unknown answer.
After having those thoughts, the fate of the skull was clear. I wanted to build an ironic reminder of our own mortality.

I like the aesthetics of digital numerical displays and I did several tests how I could best show passing time on it. I choose to let it count back milliseconds from 1.000 to .001, since I realized that by watching it, the time seemed to pass much faster.” 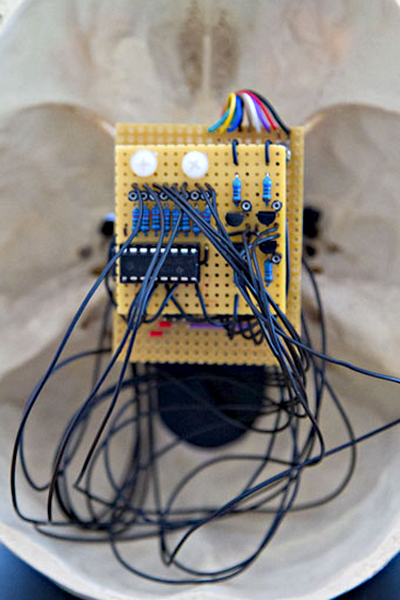 “Now that I had a clearer plan, I had to build a circuit which converts the 10MHz sine wave into a 1 ms logic signal. This can be easily used as a time signal.

I decided to mount the atomic clock part into the case of a broken surge-protected battery backup system. Therefore I had to adapt the case quite a lot by welding holes shut and fabricating a plate to mount all the parts, then I painted and labeled the case. I mounted the circuit which controls the display into the carinal cavity (which kind of makes sense as well). The display is held between the teeth. For me it was important to not to drill any holes into the skull. I like to alter certain objects as little as possible.”

Reminiscent of Boltanski’s ‘Chance’ using digital counters of human births and deaths, ‘Memento Mori’ is a fascinating combination of the human aesthetic with the clinical precision of the digital. As inventors of the very concept of time, we continue to harness nature to fit our needs, yet we are always beaten by death. With improving technology and medicine emerging all the time, how does technology affect our relationship with our mortality?

Martin is also showing his work ‘Kiiltomatot’, meaning Fireflies, from dusk til dawn and during dry weather at ARS Sippola from the 18th of May to the 18th August.