This week’s pick is ‘The Defector Interactive’, an online cinematic experience about escaping North Korea.

“The Defector Interactive is a cinematic journey into what it’s like to be a North Korean who tries to escape. It begins inside North Korea and allows the user to take a POV journey across the Tumen River into China and South-East Asia. There are decision-making points and 360° interactive locations with hotspots which the user can explore for more video, information, stills.” (FFG)

Made by Ann Shin and Fathom Film group with digital agency Jam3 and Psyop, the online web doc complements the feature and TV documentary and is based on true stories told by North Korean defectors. They have also released a Facebook app where users can connect through Google Earth on Facebook, and map their videos, stories and photos. This multimedia approach, as described by film maker Ann Shin, worked especially well for the subject matter.

“While developing the documentary ‘The Defector: Escape From North Korea’ I realized no one understands what it’s actually like to live inside North Korea, or the risks involved in attempting to escape. I wanted to create something that would take people inside North Korea and give them unfettered access to their reality.

We knew that an interactive platform was the best way to immerse the viewer in this kind of POV experience. We considered tablet apps and mobile apps, but ultimately, we wanted it to be a cinematic experience where the user was sitting, giving it their full attention; so a web documentary viewed on larger computer screens made sense.

You can only do so much in film, but in an interactive web doc, you can place the user in the point-of-view of a defector — they will see, hear and experience what a defector goes through. It’s an incredibly powerful way of letting people understand experiences that are completely out of their realm.”

Fathom Film Group is a Toronto based company that produces innovative cross-platform digital projects, films and series that are critical and thought-provoking. They used Kickstarter to gain the funds to create the film, reaching their goal of $20,000 in less than 2 months.

“This was our first Kickstarter campaign and man was there ever a learning curve!  We hustled to get the word out there, and got support from people around the world and bloggers like DocGeeks and reviewers like IndieWire and London Korea Links and others. But it was hard to keep the momentum going because during the middle of the Kickstarter campaign, we had to go on a shoot in China with defectors on the run. So it was intense, but we happily made our goal (by the skin of our teeth.)  I think one of the most rewarding things about the campaign was to hear from so many people around the world who were supportive of the project. When you’re in the thick of a long project you lose sight, and start to wonder whether or not people will be interested in it. Kickstarter supporters really boosted our morale and helped us chug through to the finish.” 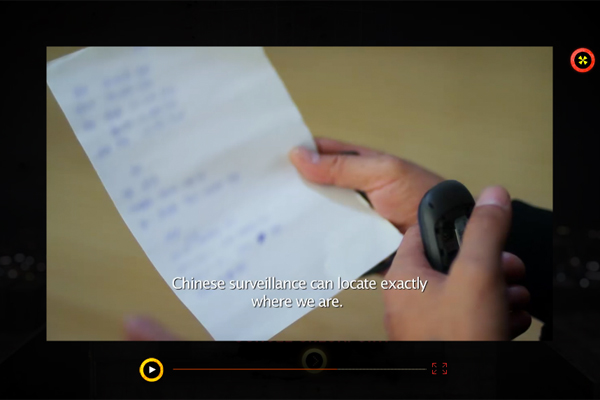 Shin explained to Alpha-ville how she got involved in the project.

“I’m of Korean background and I had originally started researching for this project several years ago after learning that there were thousands of North Koreans defecting from their country. Their radical flight to freedom mirrored in a way, my own family history. During the Korean War (1950-53) my aunt and uncle who were socialists suffered greatly for being North Korean sympathizers. They were interrogated and tortured, and my uncle ended up dying. Today there are many desperate North Koreans risking torture, imprisonment — risking their lives in fact, in order to try and escape. Many try to escape into China, but even if they make it across the Chinese border they’re still not free, for they could be deported back to North Korea at any given moment. It’s gotten worse for them since Kim Jong-un came into power. There are estimates of 100,000 to 200,000 North Koreans living in hiding in Asia and Southeast Asia. It’s shocking, and I was compelled to share their story.”

I knew I wanted the Interactive to feel very immersive, so we shot a lot of footage from the point-of-view of a defector on the run. We also worked with a North Korean and his colleague based in South Korea who shot footage inside North Korea and smuggled the footage out. That material was, as you can imagine, very grainy and low-res. So it was a challenge to combine all the different kinds of assets into one cohesive experience. We developed a ‘distressed’ kind of aesthetic which worked well to help bridge the gap between the smuggled footage, the newly shot footage and the motion graphics. Jam3 programmed the site in Falsh and used some pixel bender effects, motion graphics was done in After Effects and matte paintings were done in Photoshop.”

“I think people across the world realize that Kim Jong-un is absurdly aggressive in his foreign policies, but what most don’t realize is that he’s even worse with his own people. He’s cracked down on defectors and their families and now there are upwards of hundreds of thousands of defectors living in limbo in Asia, hoping to find a country that will grant them refugee status. We can definitely do something help them. I hope people will see the importance of re-thinking deportation laws, and to re-think our approach to those seeking refugee status.”

Both The Defector Film and Interactive will be featured at Sheffield Doc/Fest in June 12-16, 2013

The Defector has been selected into 9 festivals so far, including the SXSW Interactive festival. This week they’re having their Canadian Premiere at Hotdocs Festival, April 25 – May 5, 2013.