A web publication about the effects following the Fukushima nuclear disaster. 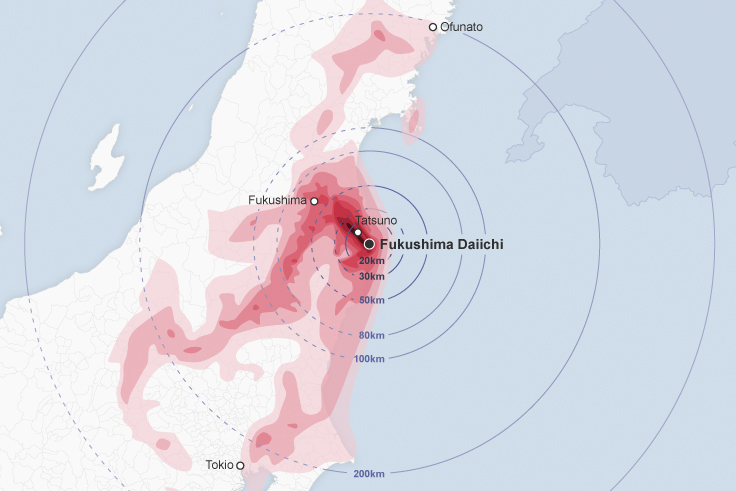 Interactive Things are a user experience & data visualization studio based in Zurich. Their past work includes the World Inequality Database on Education and Geo-Bee Rankings for National Geographic. They also run Datavisualization.ch, a news and knowledge resource for data visualisation and infographics. 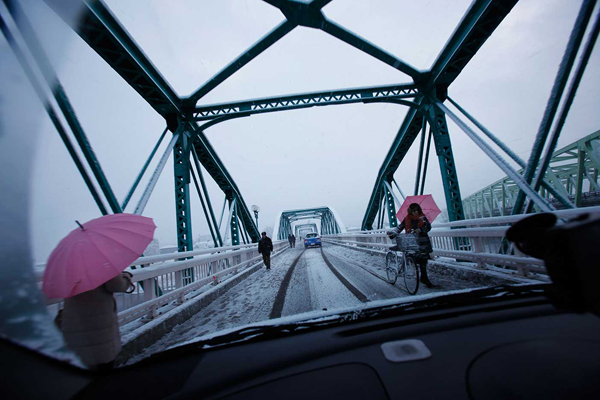 For the Fukushima project, Interactive Things collaborated with the Swiss newspaper “Neue Zürcher Zeitung”. Reporter Marcel Gyr and photographer Christoph Bangert visited the site both after the disaster in 2011 and more recently in 2013, bringing back a wealth of stories and photographs surrounding the four people they interviewed. Each chapter of the publication focuses on a different individual and their stories.

“Most of us in the design team didn’t have any prior experience in working on journalistic projects like this which gave a very interesting twist to the work process. Since the content (written by Marcel Gyr) was something that was created in parallel to the design process, our task was to develop the right kind of framework for it. Because of this parallel development it was very important that we were able to work directly at the NZZ offices to easily get questions answered, decide on contents and keep everyone on the team up-to-date with where the text and thus the project was going.” 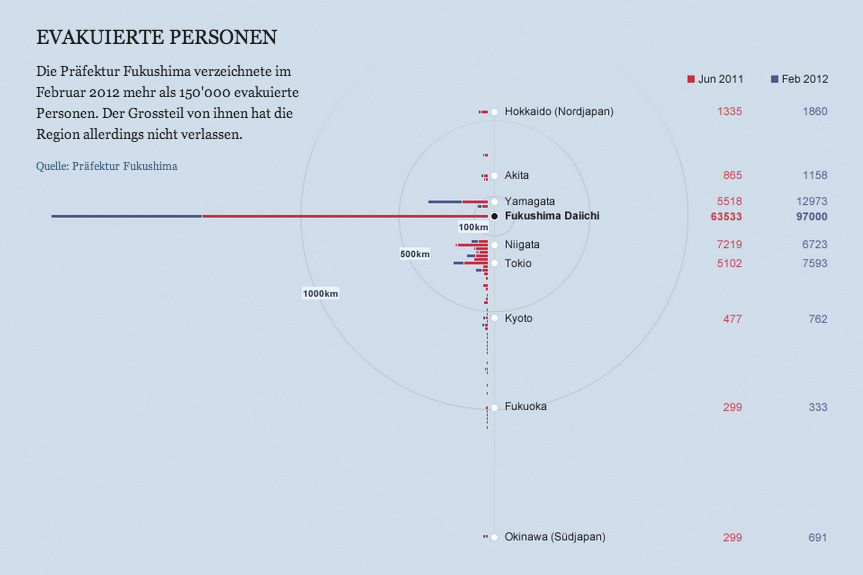 “Since the article would include media such as video, photos and visualizations, we wanted to use them in a way that explained certain subtopics of the stories without creating a distraction for the reader. The placement of them was in many ways crucial both for keeping the amount of material similar through all the chapters, as well as creating a balance between visual elements and the text. When we considered the layout of the page, we also wanted to keep the focus on the people in the story and portray them in an honest manner.” 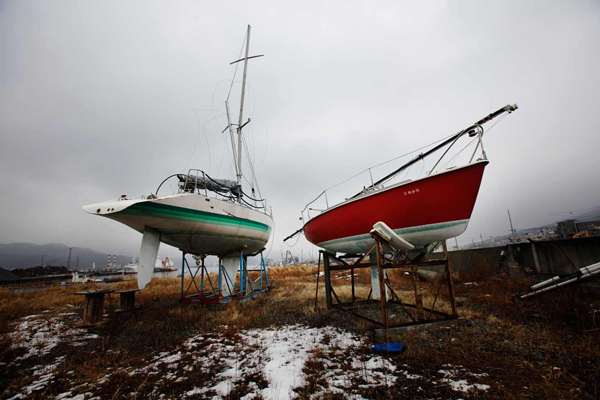 “After sketching out the layout we moved on to think about the transitions and actions of the content and how to mark the beginning and end of the chapters. The initial ideas were prototyped in Apple Keynote to see how the transitions between the chapters would work together with the text, the pictures and the videos. We wanted to test how content could be displayed during reading and how the the chapters could be divided in order to maintain a good flow in the story.”

“The visualizations for the different parts of the text served the purpose of giving more depth to the topics. For example in the chapter about radiation, the measuring units micro- and millisievert are mentioned. Here we wanted to explain what these units measure without going into too much technical detail. The aim with this specific visualization was to show the amount of radiation that is mentioned in the text and compare it to places and situations that we are exposed to during our everyday lives. We used Processing to render small Gif animations where each of the squares represent the radiation amount in the shape of small moving particles, because that’s what Sievert actually measures. The more dense the particles are, the more radiation it symbolizes. By using this visualization technique, the readers can start to “feel” what these abstract values mean.” 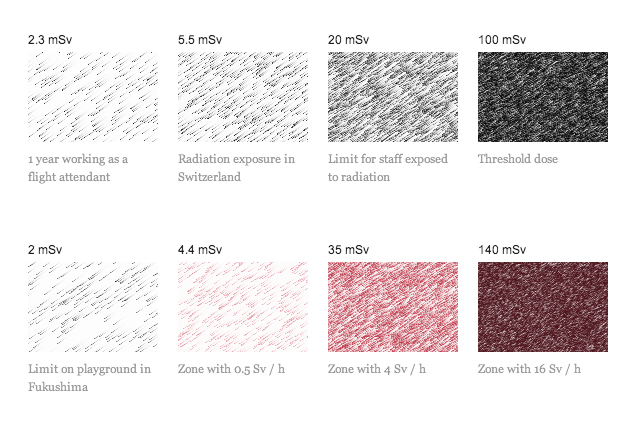 The interviews reflect the human side of what has been happening over the past 2 years, for example the interview with a school headmistress explaining the problems involved in getting Fukushima children back to school. She describes how careful the schools have to be with allowing children to play outside in the radiation, and that they have been very strict about measuring it. Another measure she tells about is decontamination of the soil. “With an excavator, the topmost layer of soil is removed down to a depth of 5 to 15 centimeters. Subsequently, the contaminated soil is poured into a freshly excavated hole. This is lined with a waterproof tarpaulin. Finally, the pit is covered with sand.” 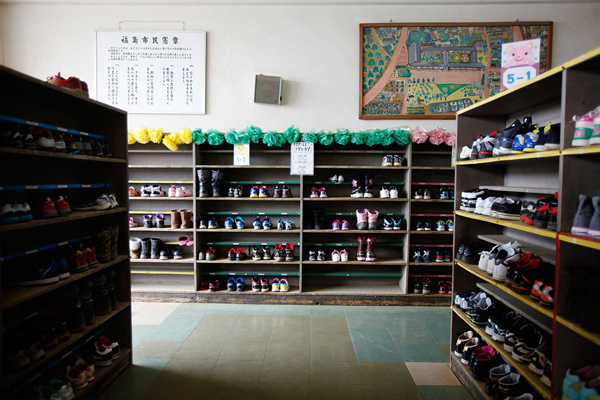 Kazuma Yonekura, head of the psychiatric Spitex in Soma explains how “alcoholism, gambling and domestic violence” has prevailed  in cases where evacuees no longer seek jobs because they live on Tepco payments. “For a comparative study of the psychological effects it is still too early. Many are only now faced with the problems. At the beginning of the disaster they fought for their lives and had to re-organize this. The vast emptiness often come only with a certain time lag, especially in those who have lost family members.” 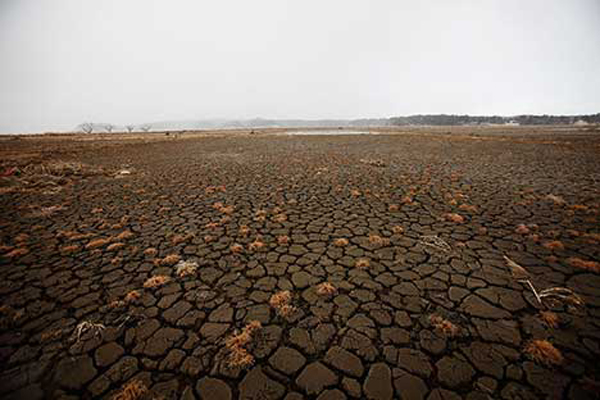 Interactive Things told us about their future plans. “Following the Fukushima project, we are extending our collaboration with the Neue Zürcher Zeitung to help establish a well functioning workflow for data-driven journalism projects. This is very very exciting for us as the NZZ is one of the most important newspapers in Switzerland, and the opportunity to work in-house with their editorial teams is fantastic. Furthermore, such a collaboration between journalists, designers and developers is new for them and us, so we will have to learn a lot going forward.
Together with our client Thumbtack and the Kauffman Foundation we recently launched the new survey results about Small Business Friendliness in the United States. It’s an extensive analysis on state and city level presented as an interactive visualization.
Looking forward, we are co-organising the workshop on information visualization that follows the see conference which takes place in Wiesbaden by the end of this month. Participants of the workshop will have the opportunity to talk face to face with international speakers from the conference and get a more personal inside scoop.”

VISIT THE FUKUSHIMA WEB PUBLICATION >>
(This publication is written in German only, you can use Google translate to read in English).