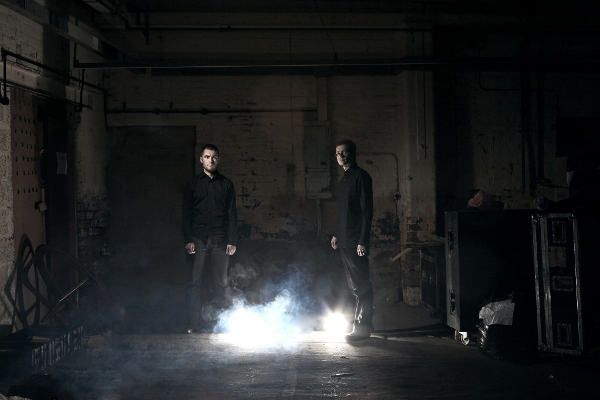 Meeting at Leeds College of Music in 2005, Gavin Miller and Thomas Ragsdale broke through as Worriedaboutsatan, before transitioning to their current production mantle as Ghosting Season. Following on from two sought-after EPs last year, the Manchester-based duo released their debut long-player ‘The Very Last Of The Saints’ back in May via Sasha’s Last Night On Earth imprint. Contrasting the visceral edge of post-rock bands such as Mogwai and Explosions In The Sky against techno sensibilities, the album received a raft of positive reviews with comparisons made to early Aphex Twin and The Velvet Underground. For their contribution towards Alpha-ville’s podcast series, Tom and Gavin have crafted together a vastly eclectic track selection, ranging from the respectively era-defining psychedelia of Pink Floyd and Tangerine Dream to the progressive electronics of Kuedo and Alva Noto.

Talk us through the creative thought process involved behind this mix.

Gavin: We had all these ideas buzzing around, and a bunch of field recordings as well, so we wanted to do something a bit different that showcased our love of techno, electronica and prog. I guess it was just an attempt to do something a bit different and show that not all techno mixes need to be the same. For example, Pink Floyd can sit next to stuff from Semantica. It’s up and down, and there are plenty of curveballs thrown in for good measure too, so I’d like to think it’s something a little different at the very least! It definitely has two parts to it – a cold, brittle start that flows into something a bit warmer, before getting more organic towards the end.

If you had to pick three artists that have influenced Ghosting Season’s productions to date, who would they be and why?

Tom: Probably…. Underworld, Moderat and Can. It’s a pretty diverse list, but collectively it kinda sums up our love of melody, vintage synth sounds and driving rhythms.

How much inspiration do you draw from Manchester’s current electronic music scene?

Tom: A lot. The city currently has a certain vibe about it, and you can feel it through the amount of people making and promoting music here. There’s not a lot of nostalgia about at the moment either, which is really great – everyone seems to be looking forward at the moment, and pushing the new, rather than rehashing the old.

So who would be your tips for Manchester-based artists to watch out for?

Gavin: Brown Brogues if you like your scuzzy lo-fi rock. We met them at the end of last year at a gig, and then hooked up again at SXSW 2012 – really nice guys and certainly know how to drink! AnD makes some amazing heads-down brutal techno, and Rainer Veil if you want something a bit more dreamy and atmospheric – they’ve just signed to Modern Love and should have something out pretty soon.

On the subject of labels, which do you feel have excelled in 2012?

Tom: Tri-Angle is really big for us right now. Hypercolour too – loads of great stuff coming from them. Also, Modern Love seem to be going from strength to strength at the moment – some really great records and a lot of buzz flying around for them, which is awesome to see.

What would be your artist albums of the year?

Tom: Andy Stott‘s ‘Luxury Problems’ and WIFE’s debut EP were both amazing records.
Gavin: I’d say the new Godspeed album, for sure – it totally blew me away first time I heard it. Great to have a band like that around at the moment as well. Also, new ones from Shackleton, Tindersticks and Voices From The Lake had a definite impact – really great albums!

Agreed, Luxury Problems and Voices Of The Lake for sure. What lies ahead for Ghosting Season in 2013?

Tom: plenty of new music and hopefully lots of touring as well.

Is there any possibility of the follow-up to ‘The Very Last Of The Saints’ in 2013?
Gavin: Perhaps. For now, we just want to concentrate on getting some singles out before we do anything else.