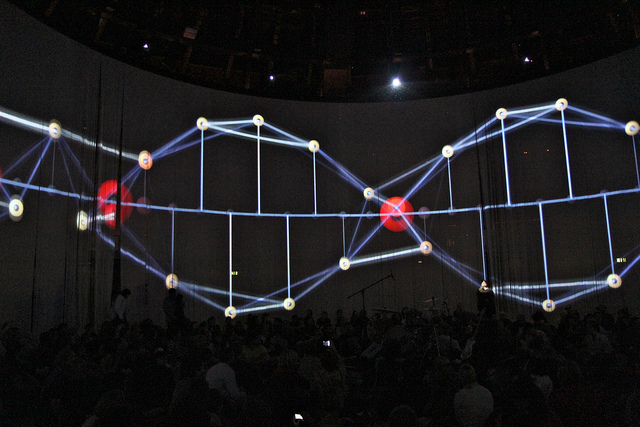 A study in simple harmonic motion and the nature of complex patterns created from the interaction of multilayered rhythms. Visuals made with openFrameworks, which also sends midi to Ableton Live to create the sounds.This version was designed for and shown at Ron Arads Curtain Call at the Roundhouse.This ultra wide video is mapped around the 18m wide, 8m tall cylindrical display made from 5,600 silicon rods, allowing the audience to view from inside and outside.

It is an excellent audio visual piece from Memo Akten who has been contributed to the openFrameworks development, especially in the area of creative media. “Simple harmonic motion” is an experimental audio visual series exploring the creative interaction between sound parameters to complex visual patterns by many different tools such as Ableton, Cinema4D, processing, openFrameworks, and  the mixture of them.  You may want to take a look at the Flickr stream of captures from the Ron Arads Curtain Call stage. It is an absolutely fantastic music experience in a immersive setting.