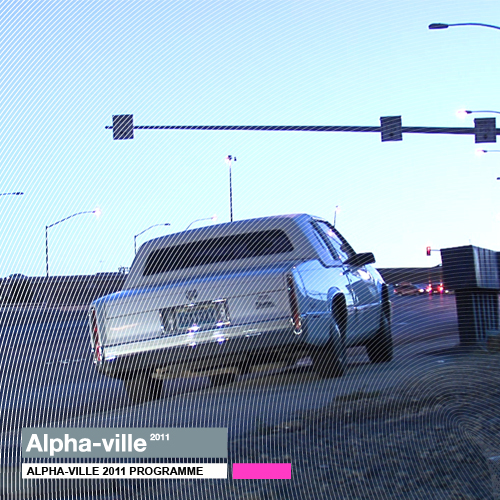 synopsis: The video works by Nicolas Provost are characterised by their cinematic language, used in both experimental and narrative short films. He uses the language of film to manoeuvre and influence the interpretation of images and stories. He manipulates time, codes and form, twisting and shaping new narratives and experimental sensations that tightly bind visual art and cinematography. Alpha-ville is delighted to present Stardust, the second part of the trilogy where Nicolas Provost investigates the boundaries of fiction and reality by filming everyday life with a hidden high resolution camera and turning the cinematic images into a fiction film by using cinematographic and narrative codes from the Hollywood film language. Stardust was  in competition at the Venice Film Festival and features cameos by Jon Voight, Jack Nicholson and the last recorded footage of Dennis Hopper.

bio: Nicolas Provost (1969) is a filmmaker and visual artist who has moved back to Brussels after a ten-year stay in Norway. His work is a reflection on the grammar of cinema and the relation between visual art and the cinematic experience, analysing and questioning the phenomenon of cinema, its various elements, its influence and conventional rules. His work intends to walk on the fine line between dualities and balance between the grotesque and the moving, beauty and cruelty, the emotional and the intellectual. Time and again his phantasmagorias provoke both recognition and alienation and succeed in catching our expectations into an unravelling game of mystery and abstraction. With manipulations of time, codes and form, cinematographic and narrative language is analysed, accents are shifted and new stories are told. In his found footage work, filmic memory and perception are stimulated by the use of film historical fragments. Apart from the use of film and visual language, sound is also a constant factor in Provost’s body of work, as a rhythmical spine or an emotional guideline.